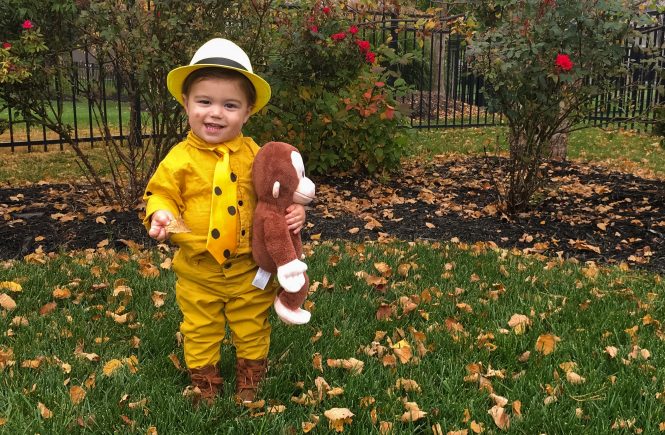 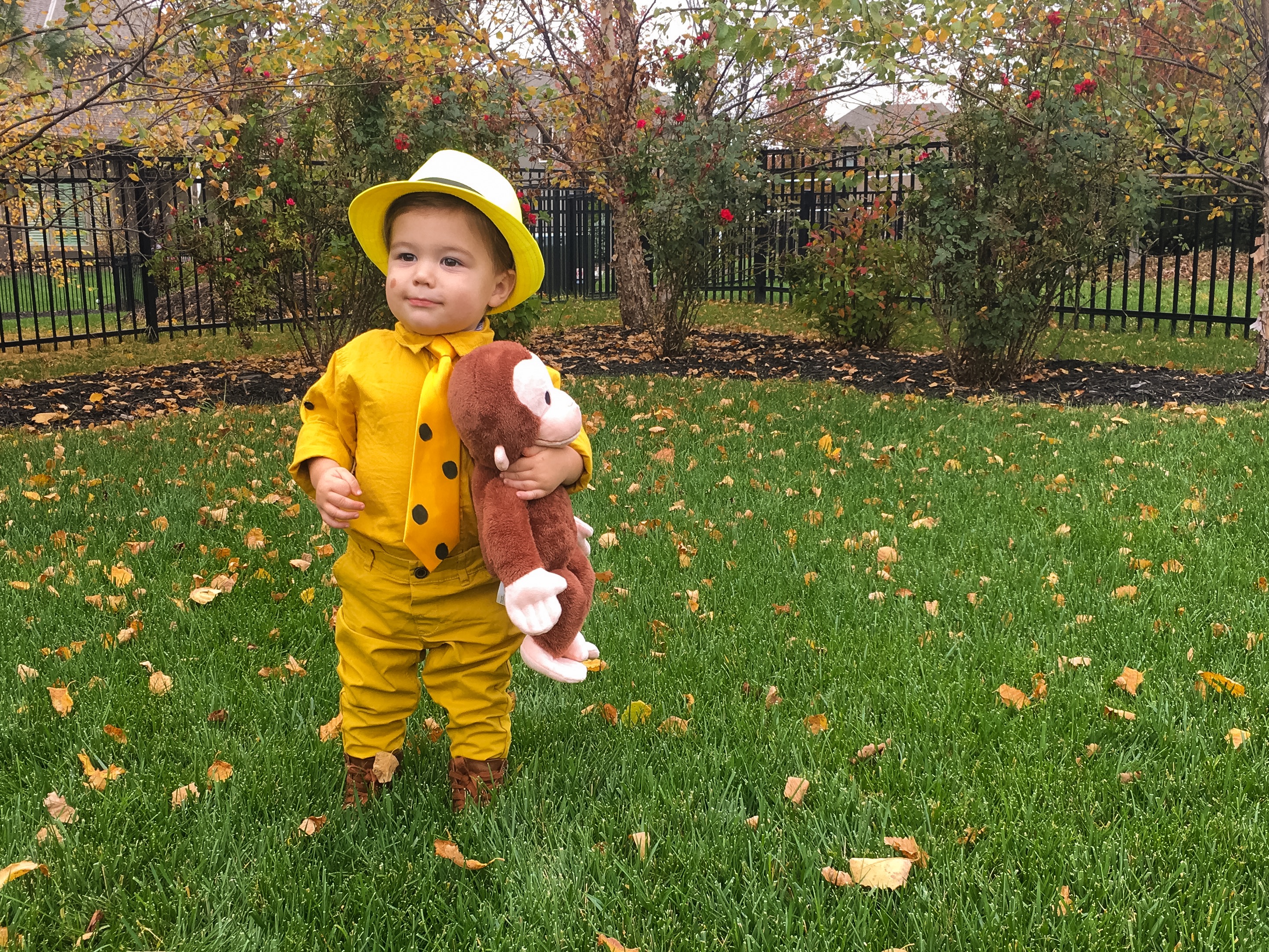 As you can see, the main things you’ll need for this costume are: 1] lots and lots of yellow and 2] a stuffed monkey. Oh, and a Curious George-obsessed toddler. 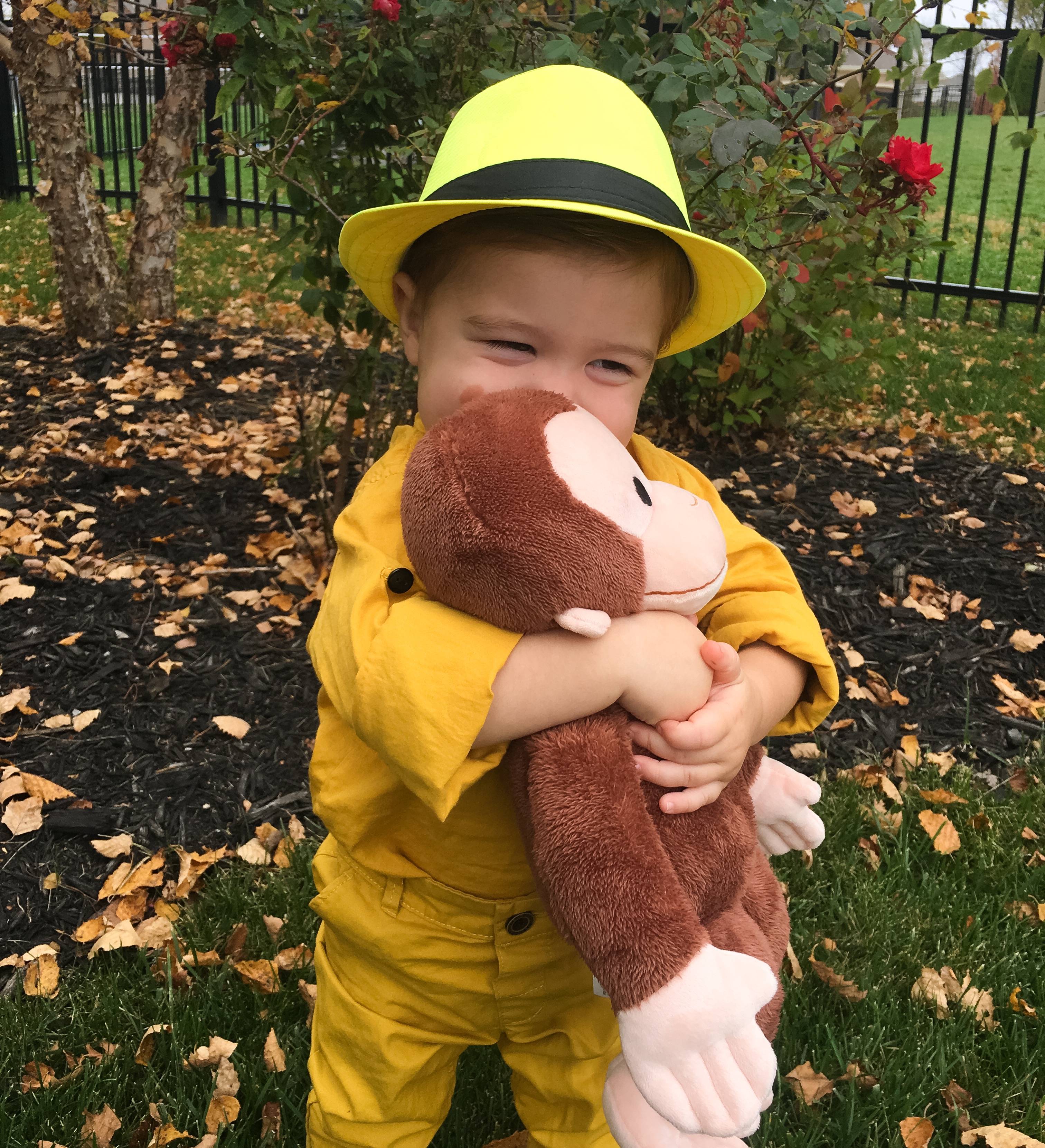 My little toddler thought it was coolest thing ever to dress like a character from Curious George!

Plus, he still sleeps with this Curious George stuffed animal. I thought he would just use it for the costume, but he’s slept with it every night for the past year! I really got my $5 worth out of that thing. It was a Kohl’s Cares promotional item, and, unfortunately, it appears they are no longer available per the Kohl’s website. Might be worth a call to your local store to double-check, though! 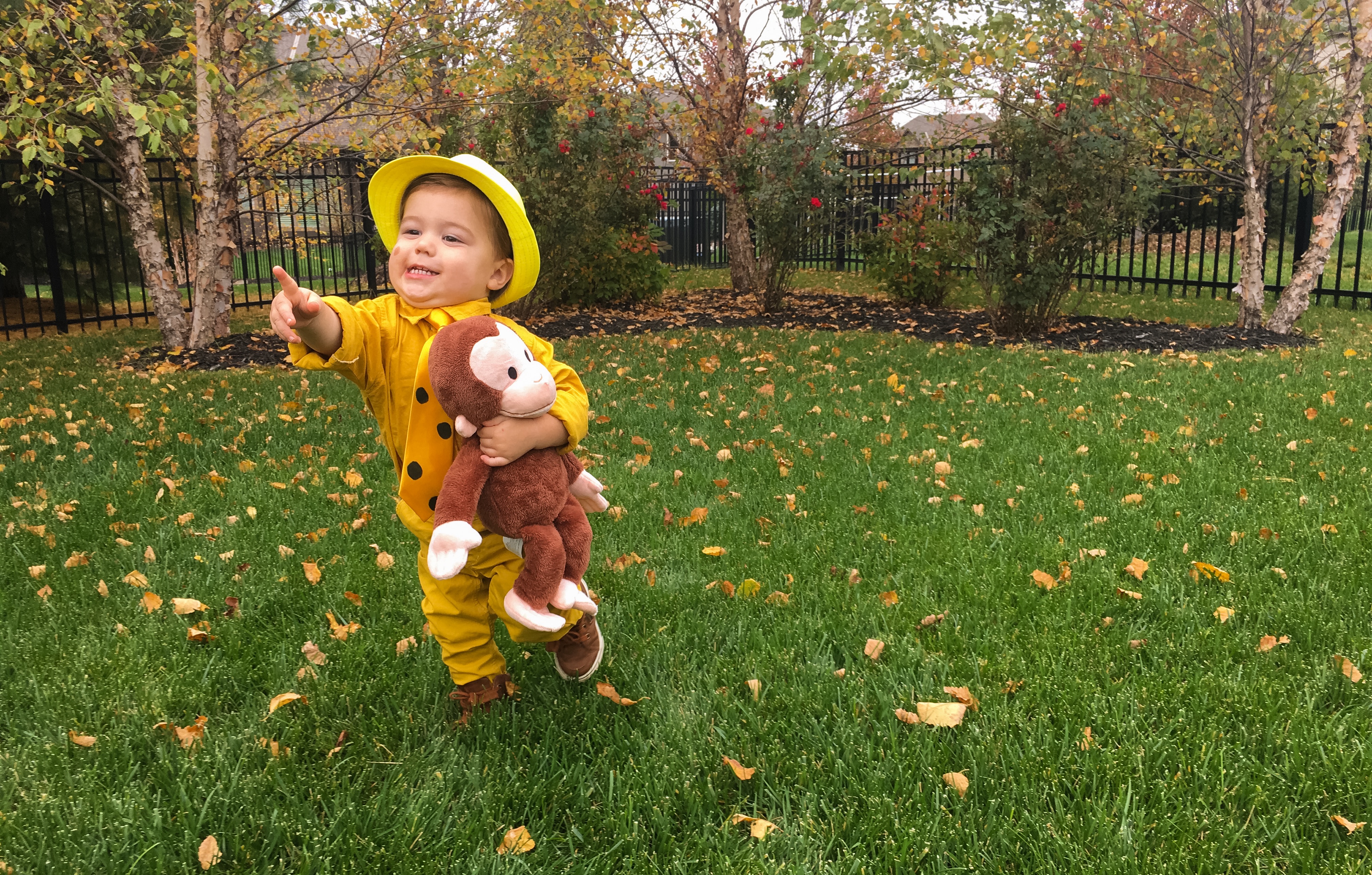 This was pretty much his look for trick-or-treating the whole night. CAAAAAANDY! And he kept a tight grip on his stuffed Curious George all night. I kind of figured that I would end up carrying it after we visited a few houses, but he wasn’t letting of that thing.

If you have 2 little ones, this could be a sibling Halloween costume with the baby dressed as Curious George! Now I almost wish I would’ve waited to do this costume until this year. 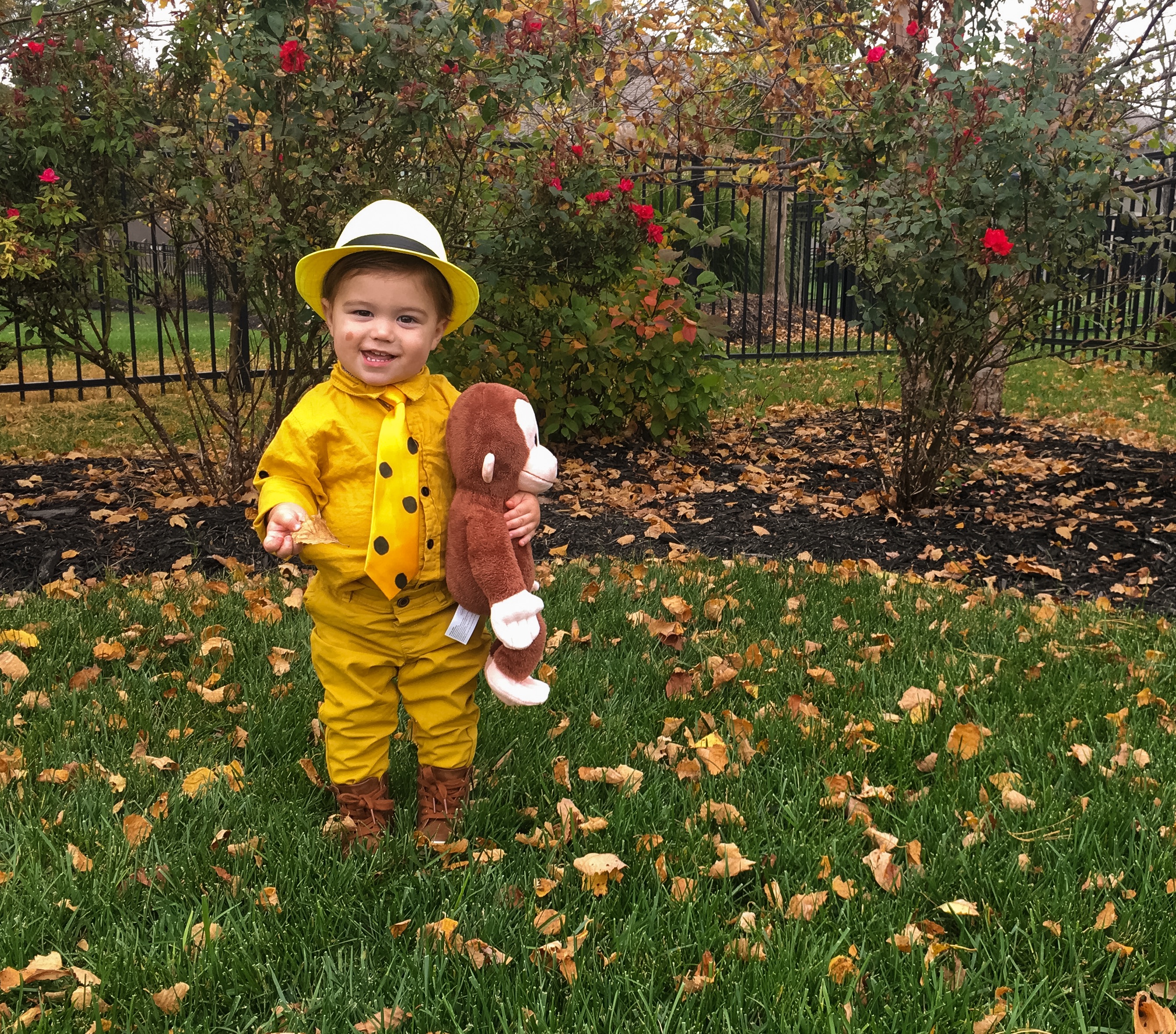 Here’s what you’ll need to recreate this DIY The Man in the Yellow Hat Costume for your toddler:

Remember, if you have trouble finding yellow items, you can always dye your own. Last year, I only had one kid, so I planned ahead and ordered yellow items online so I wouldn’t have to dye anything. Now, I have two kids and do literally everything at the last minute, so I’m having to do some dying for this year’s costumes. You win some, you lose some.

By the way, The Man in the Yellow Hat has black polka dots on his tie, which I expertly re-created with the help of a Sharpie. Look for my exhibit at The Met next week. 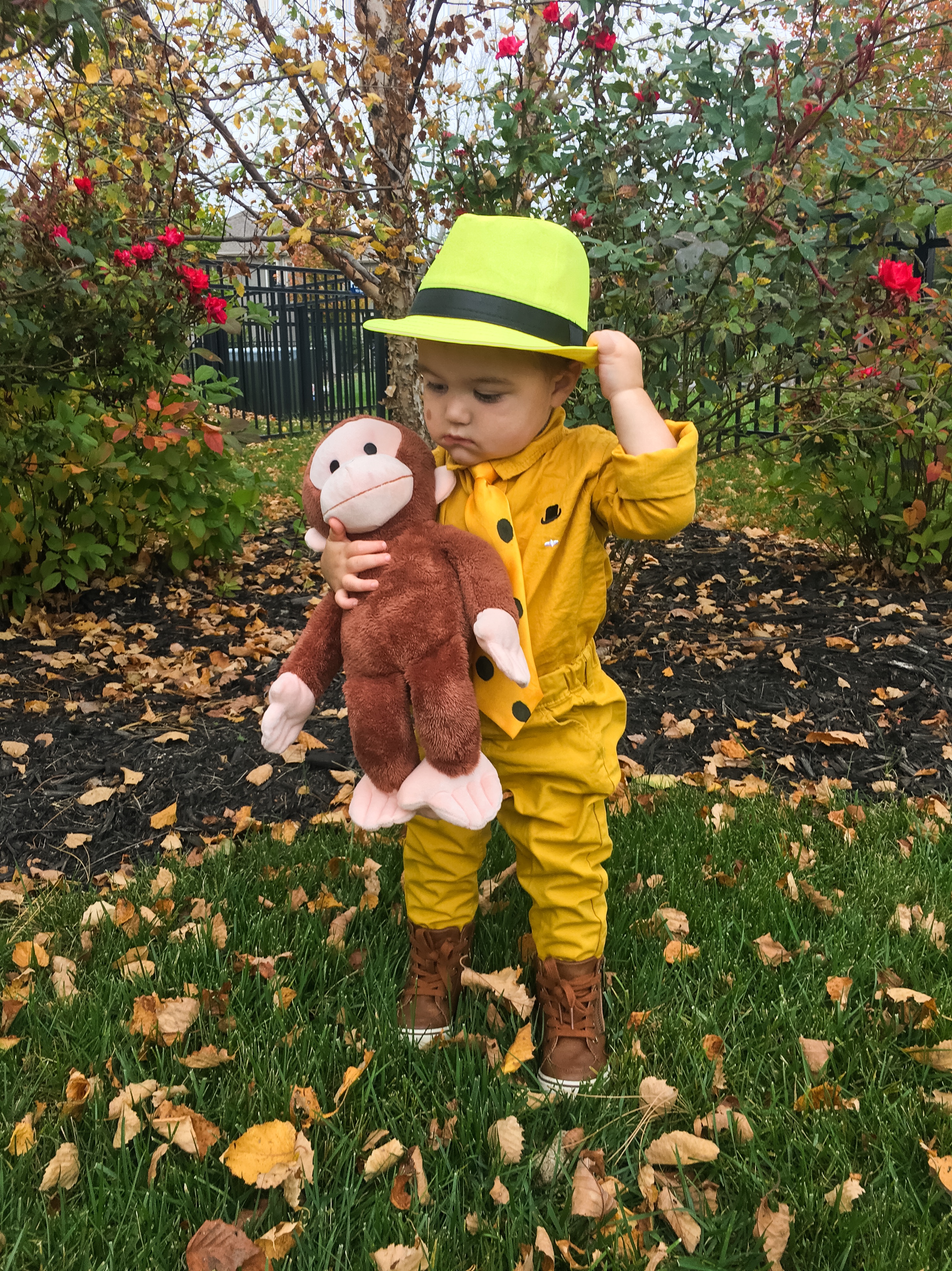 I was unable to locate a yellow hat that exactly matched his pants and shirt. I’ve seen some tutorials online to make your own The Man in the Yellow Hat style hat [like this one], however, they honestly looked like more effort than I wanted to put in for a toddler Halloween costume. Sorry, just keeping it real. My 2-year-old didn’t seem to mind the different shades of yellow! Haha. 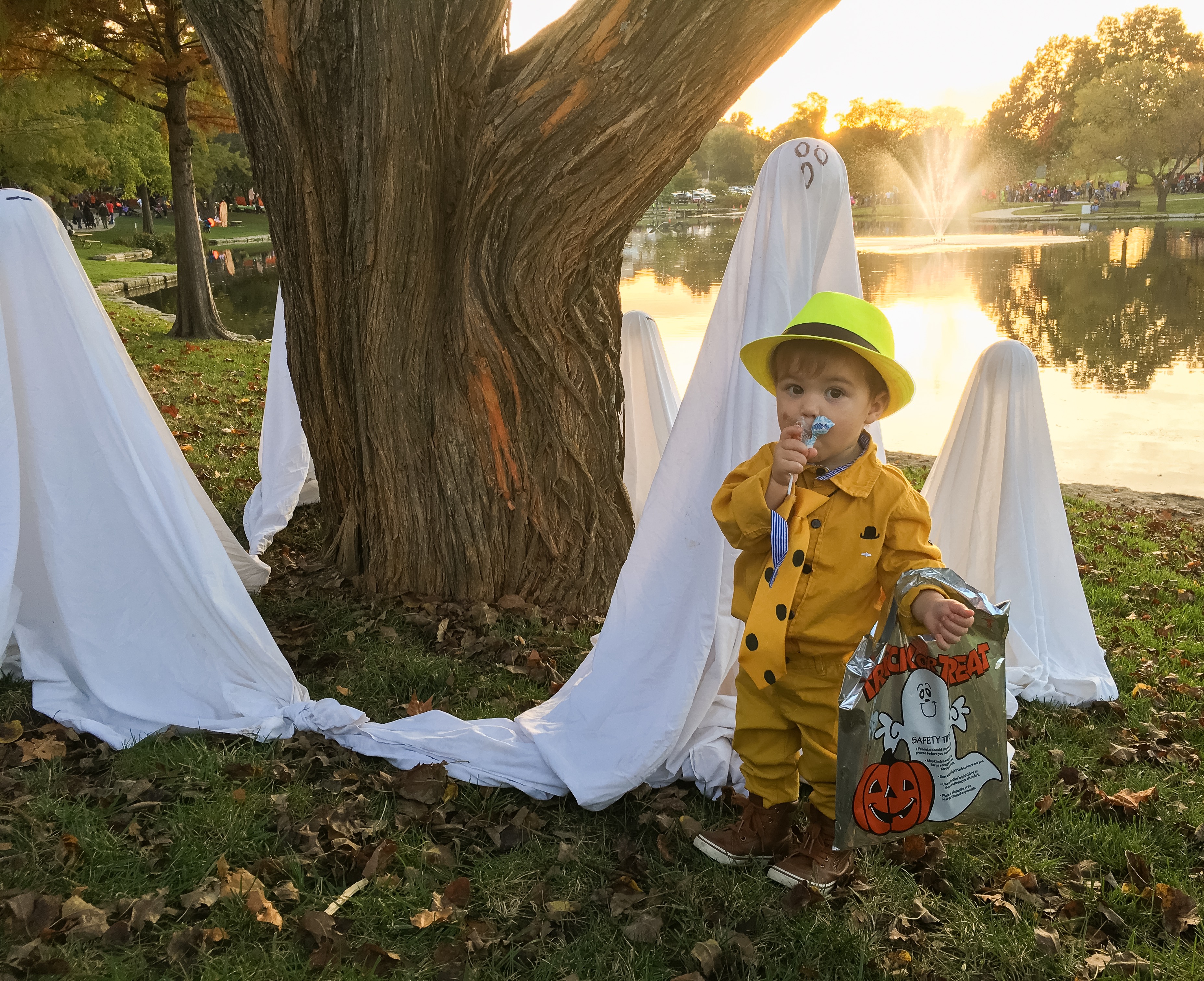 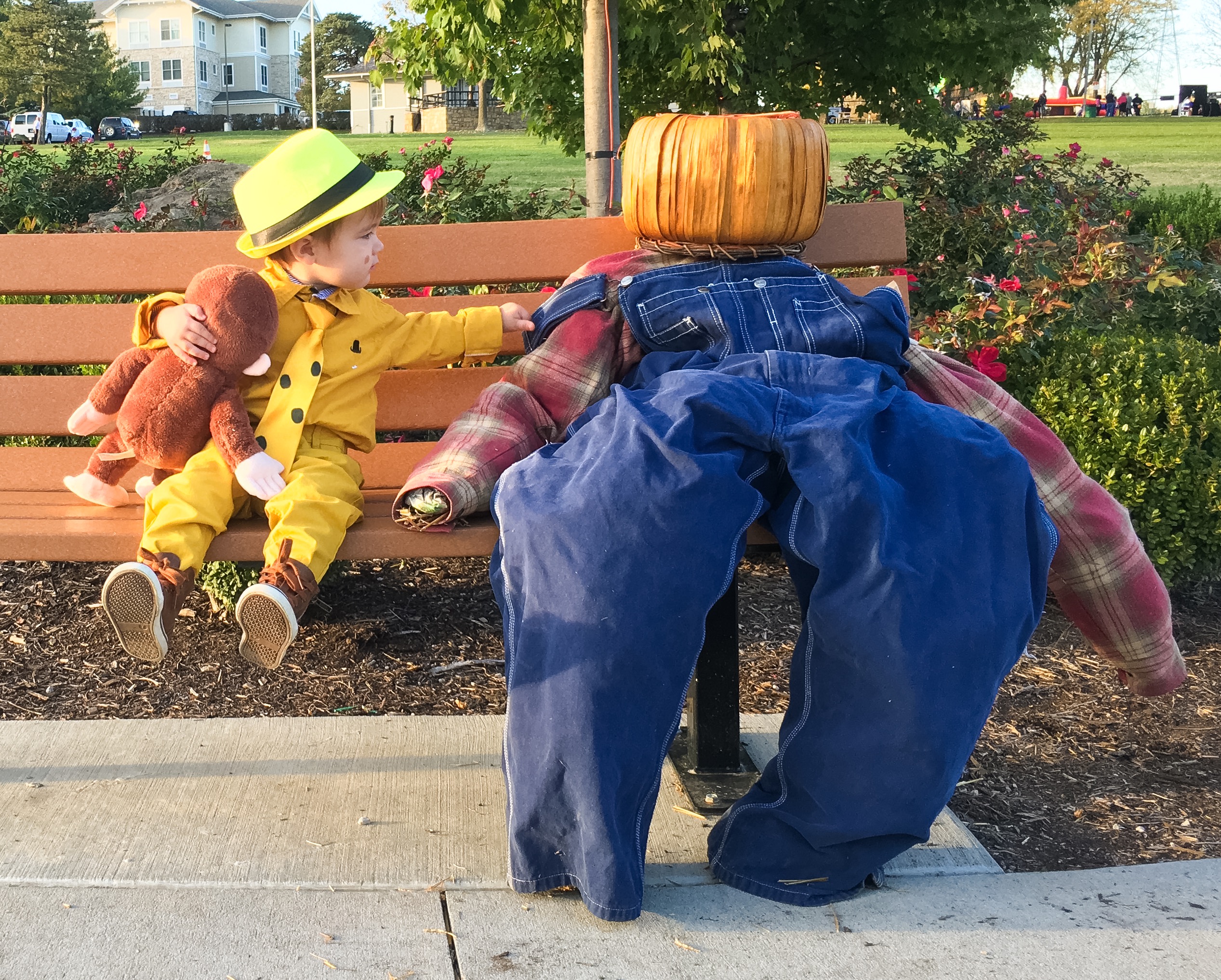 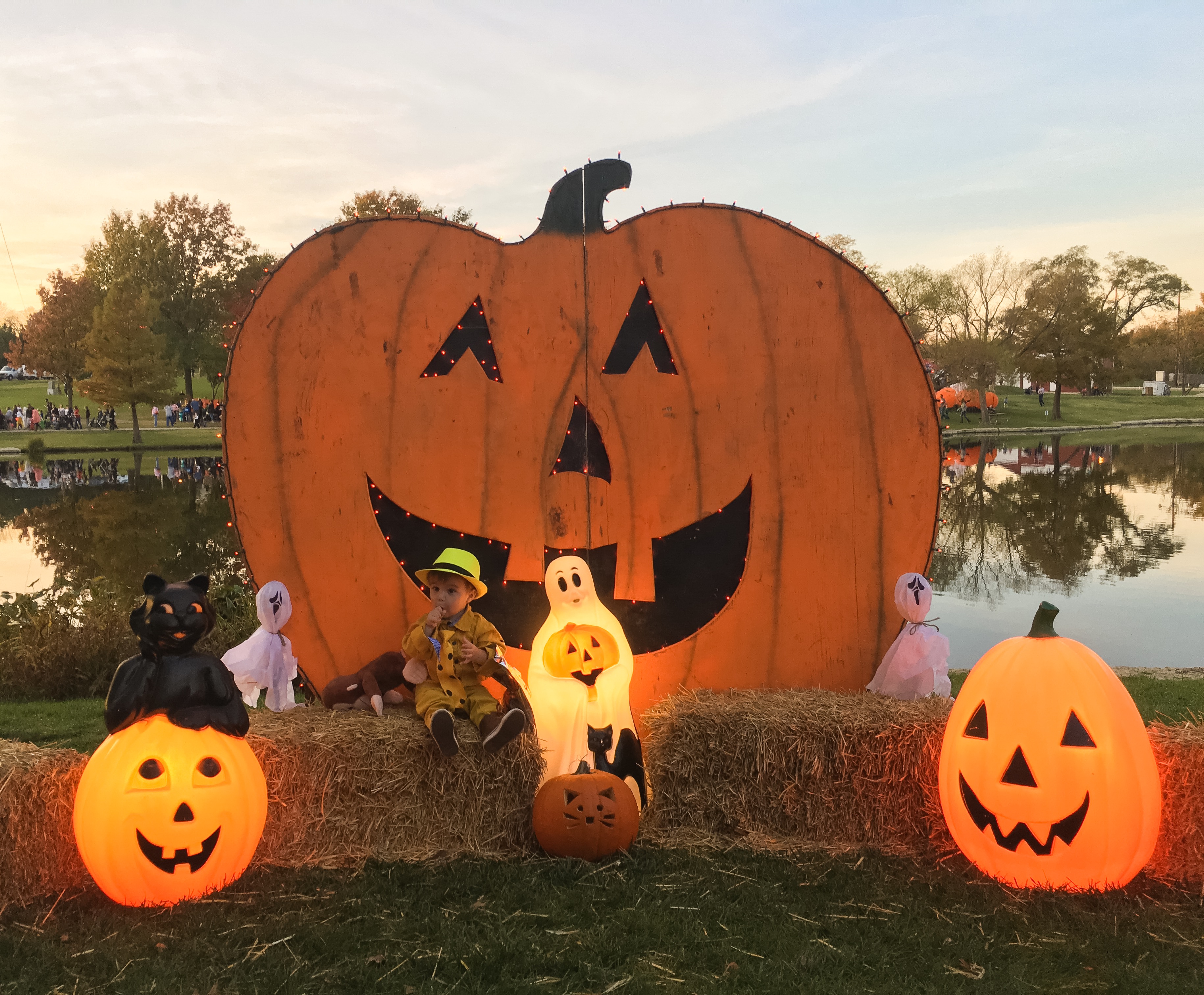 The Man in the Yellow Hat and Curious George were the hit of our local Halloween festival! We were getting stopped left and right to comment on his costume. Proud Pinterest mama moment! 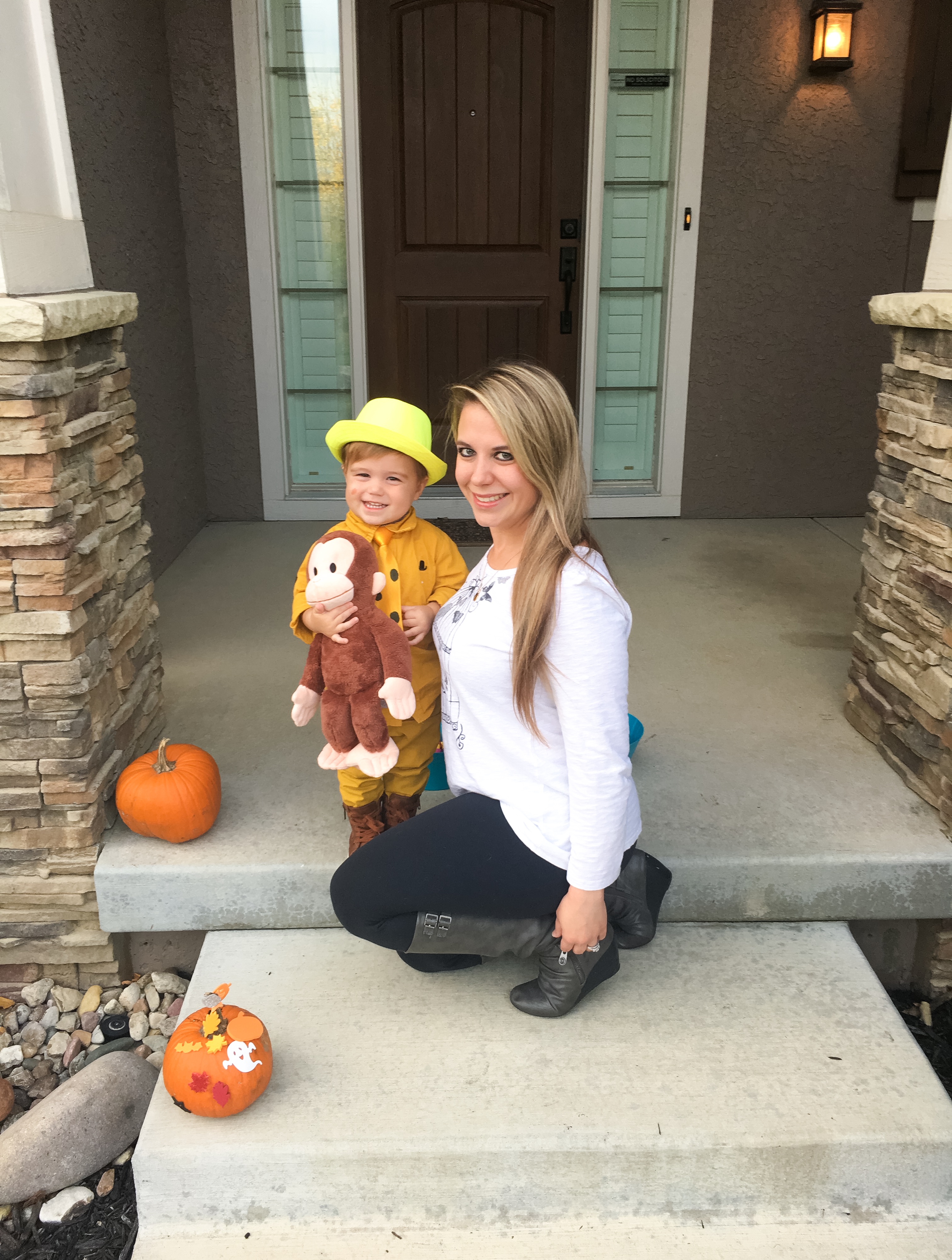 And, of course, trick-or-treating with mom and dad on Halloween night! I think Colton walked more on Halloween than he ever had before in his life. Turns out, free candy is a great motivator for almost toddler boys. Who knew? 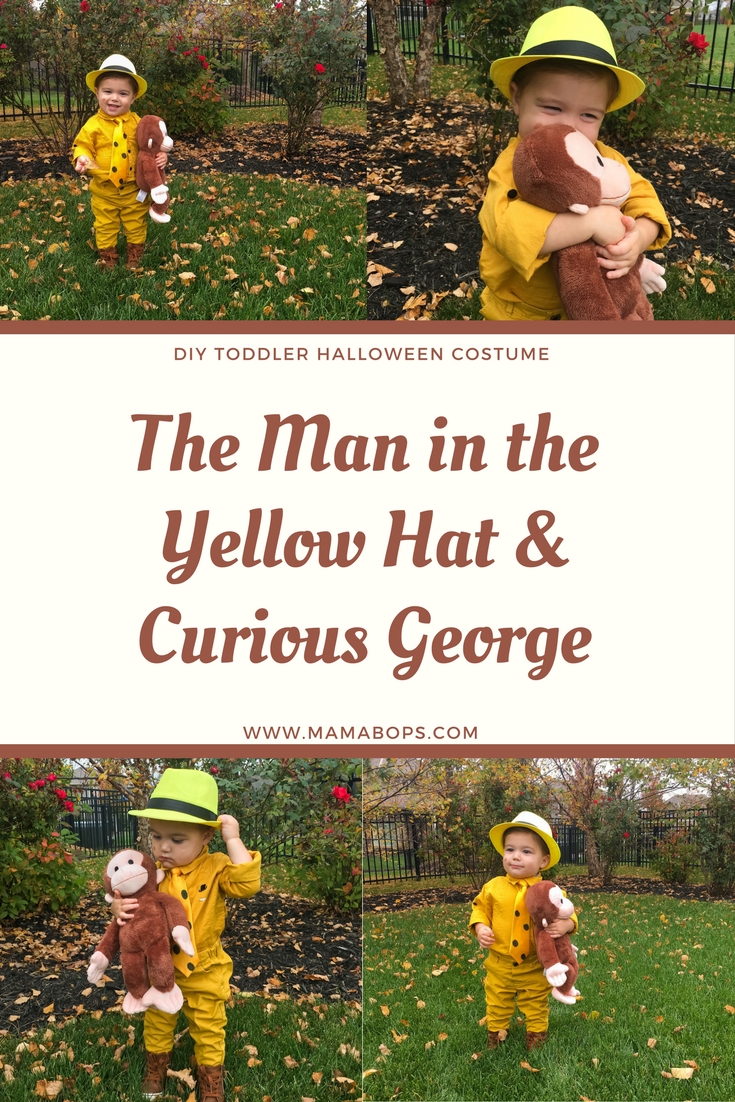 Pin this The Man in the Yellow Hat Costume [Toddler Curious George Costume] for later!

Check out some of my favorite memories with my little guy: 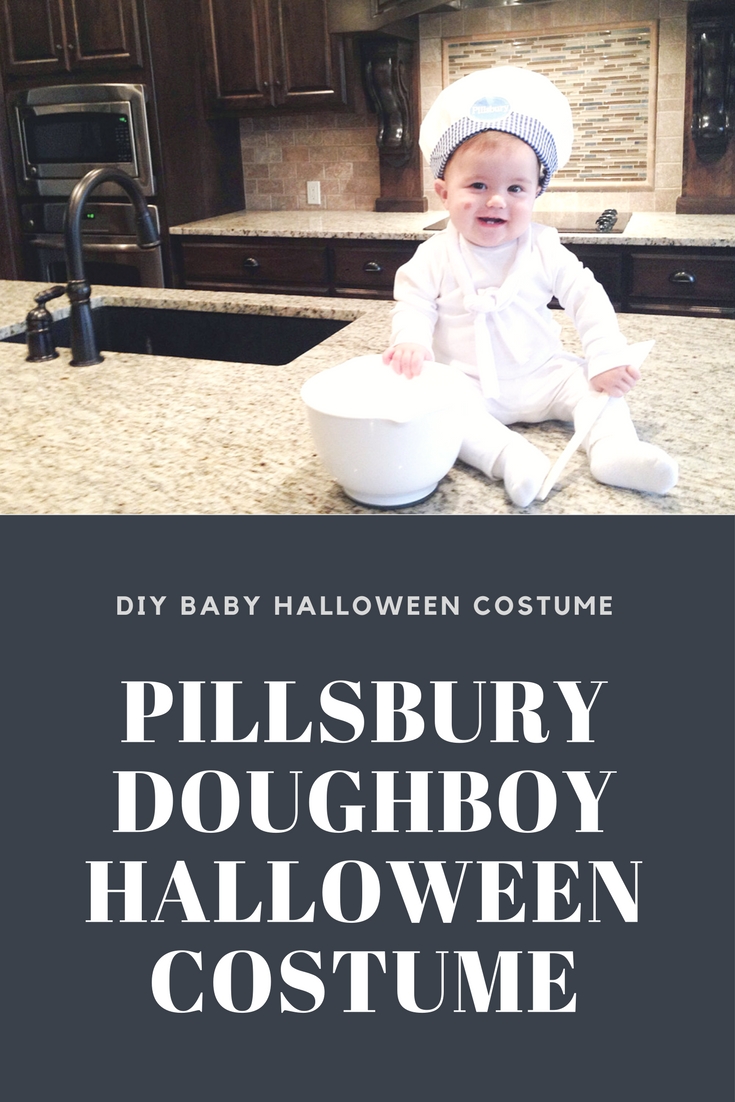 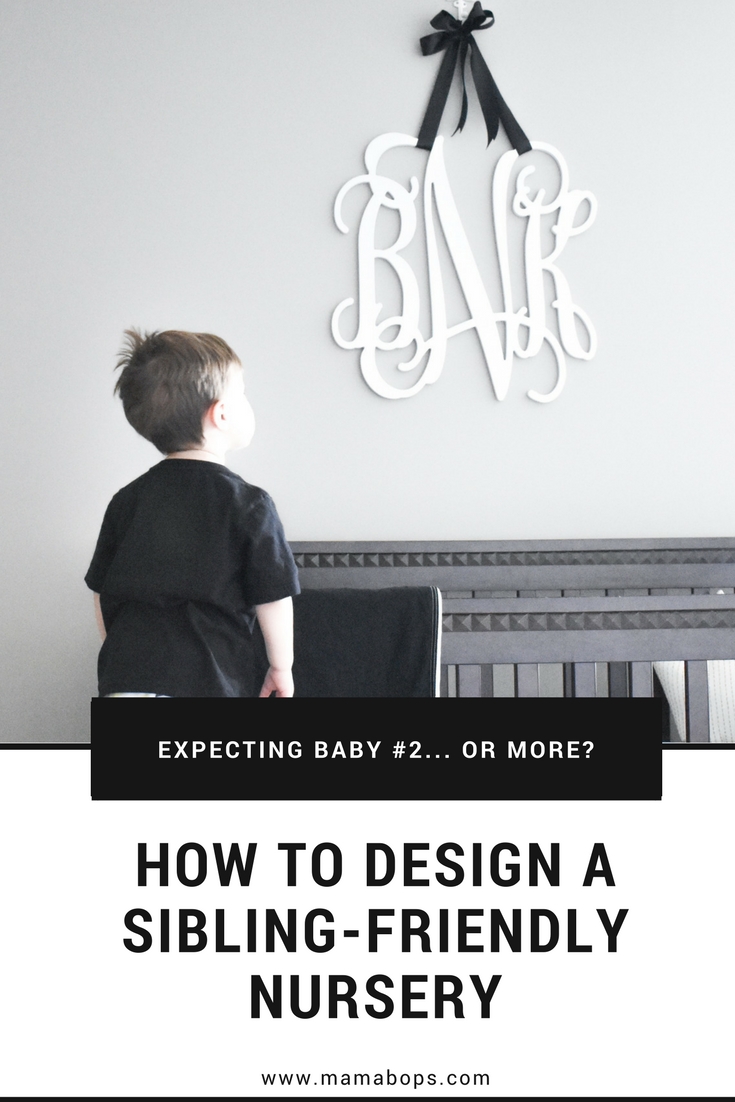 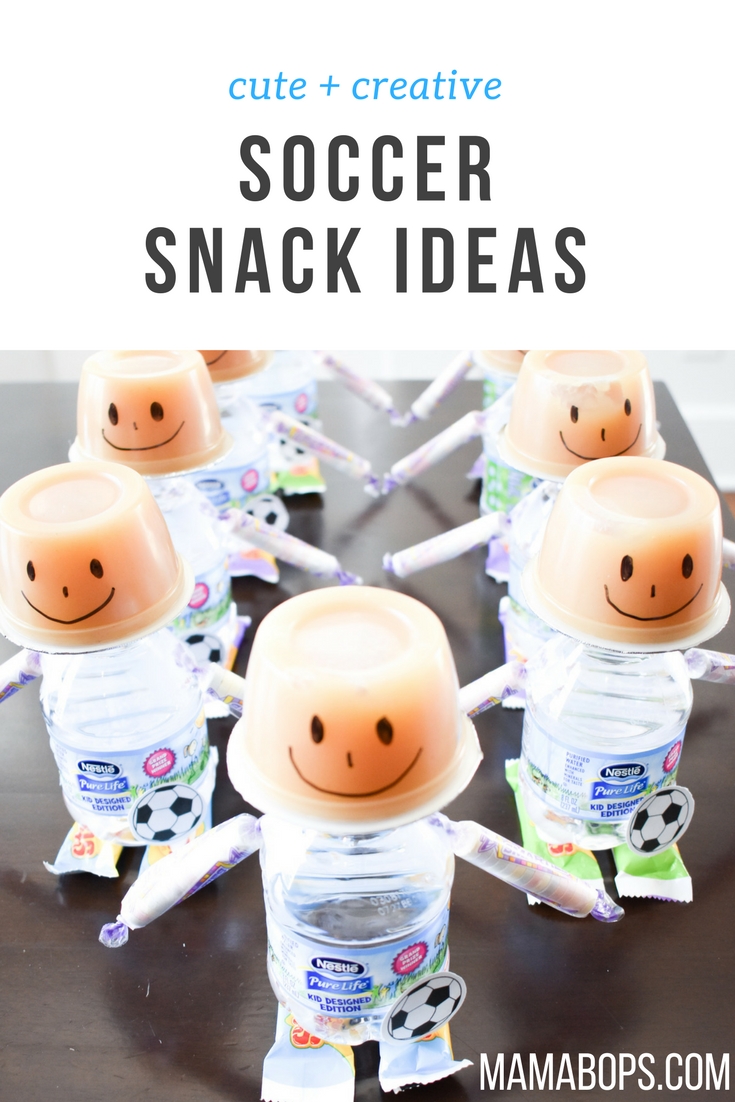 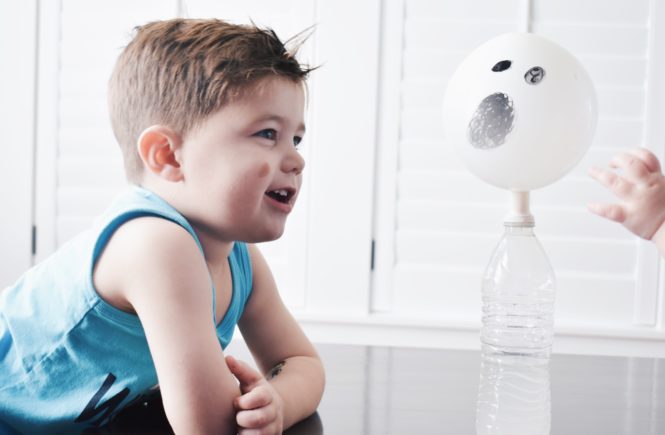 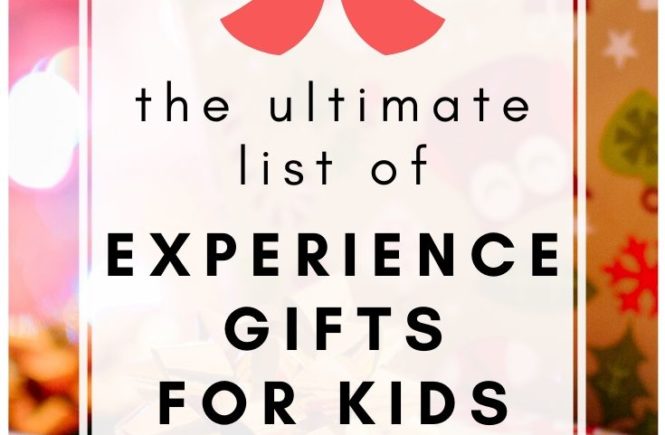 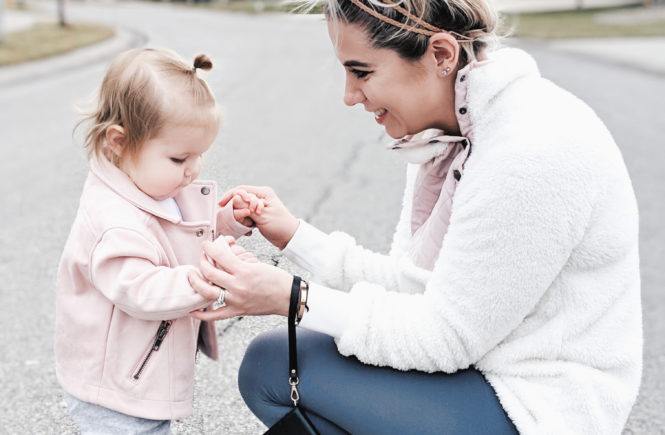