Thanksgiving as a Family of Four + Holiday Tech 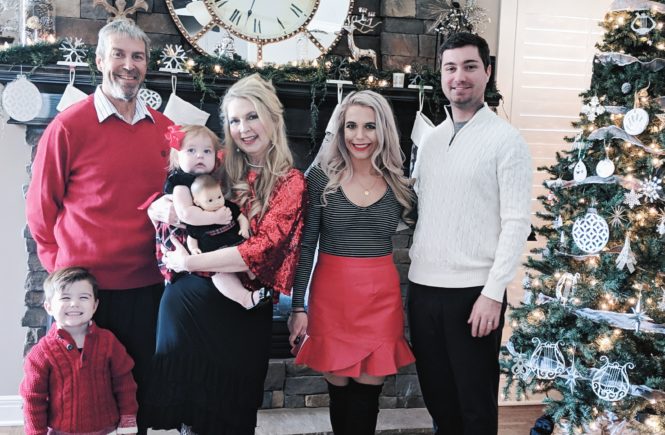 One of the main reasons I blog is to chronicle holidays and events with our family. I don’t have a great memory to begin with, so I like having a written [and photographic] record of our celebrations. And writing holiday posts always makes me sentimental, since I start thinking about how one day all we’ll have to look back on are photos. So, with that mushy intro out of the way… here’s our Thanksgiving as a family of four in 2018! 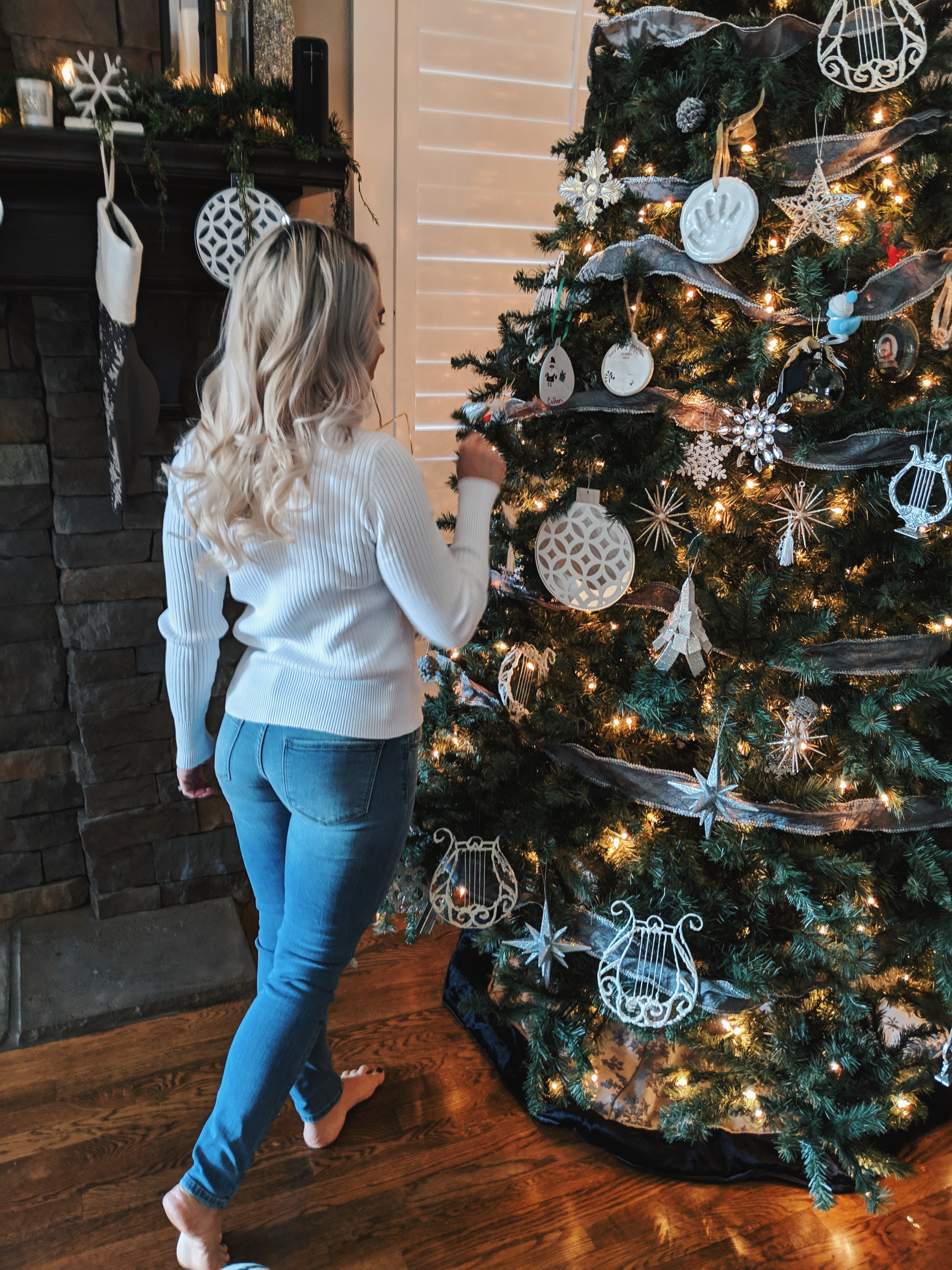 If you follow me on Instagram, you’ve probably heard me talk about my upcoming plastic surgery. I’m having a Mommy Makeover right before Christmas, so I’m trying to get as much holiday “stuff” done as early as possible. We actually got the tree up a week or two ago, and now I just have a couple finishing touches to do.

Mainly because a certain 3-year-old placed most of the ornaments, which means they need some… adjusting. Yes, I’m that mom. I wish I was the type that could just roll with it, but I’m not. Gotta embrace who you are, right? 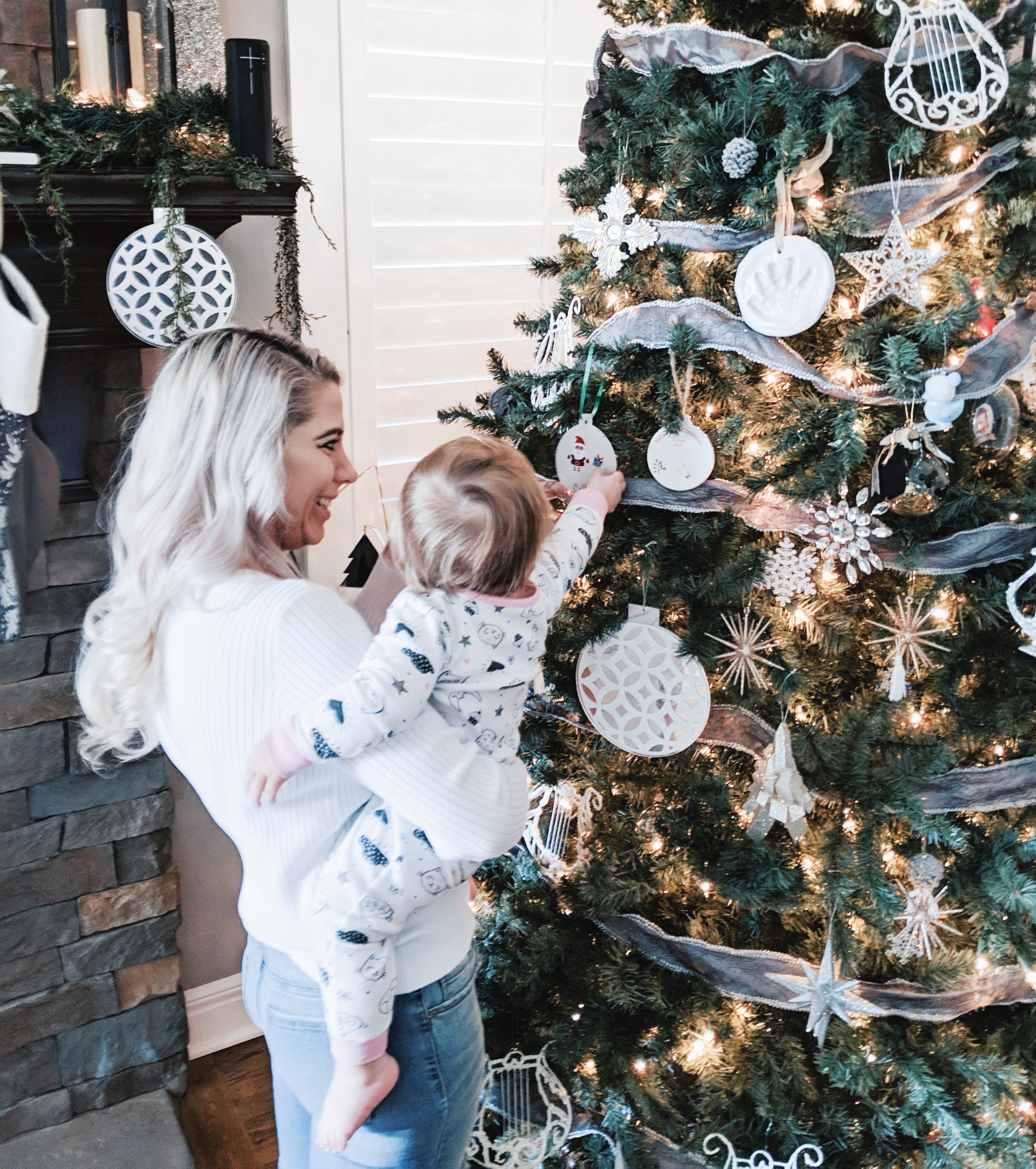 Blair wasn’t too big on decorating the tree this year, but she did enjoy looking at the ornaments after it was done. Her favorites are the ones that Colton made! Here, she’s pointing out one that he made in his Mom’s Day Out class last year. The best part of sending your kids to preschool is the cute crafts they bring home for holidays.

Although I throw away 95% of the stuff Colton brings home because, honestly, I can’t store every art project for the rest of our lives. I pick and choose a few favorites. I got caught a couple weeks ago, though–he came running up the stairs with a paper plate “pizza” that he made at school and said he opened the trash and saw it in there. Oops. He was legitimately upset, and I felt like a terrible person.

Not terrible enough to actually keep the pizza, though. That thing was covered in spaghetti sauce and smelled like Clorox Wipes because, hello, it had been sitting in the garbage. So I left it on my desk for a couple days then tossed it after he went to bed.

I think I’m in the clear now. That was over a week ago and he hasn’t said anything to me. Yet. 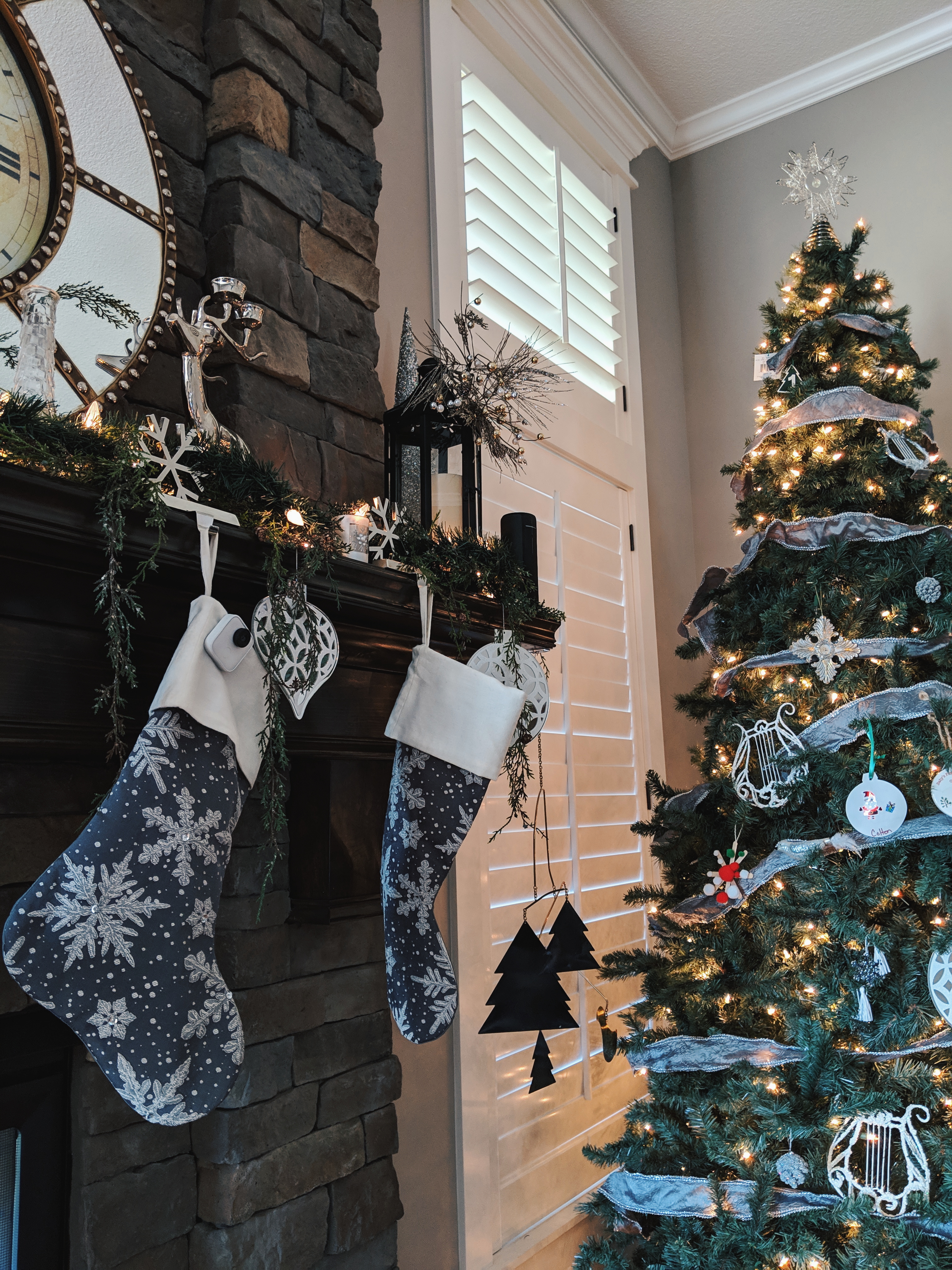 Did you spy the speaker on the edge of our mantel in the last few photos? Probably not! Verizon sent us a few devices to test out this holiday season, and this bluetooth-enabled JBL speaker is a winner for our home because of the sleek design. It’s portable, so we’ve been able to move it throughout the house to listen to music wherever we are. 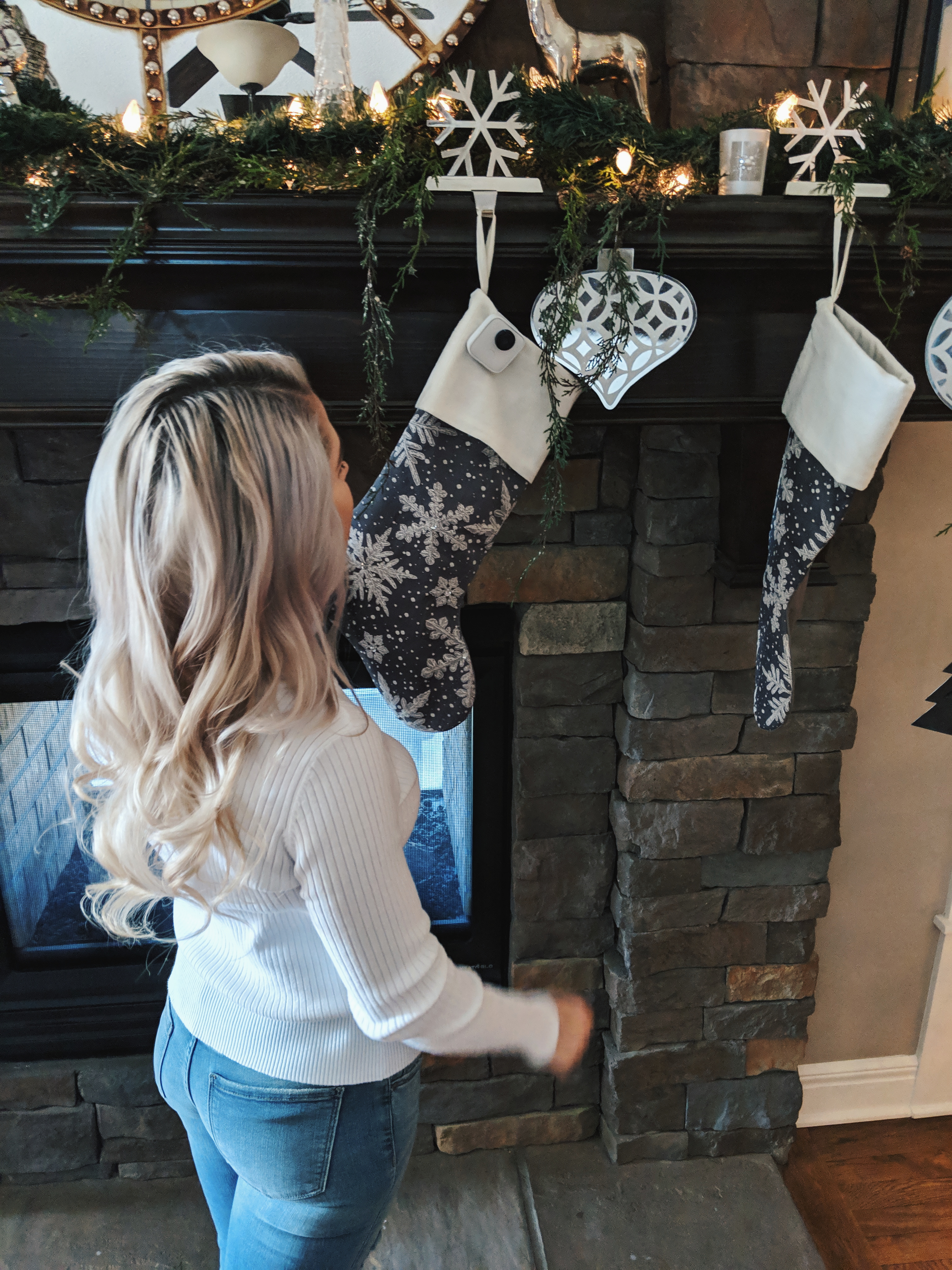 Another fun device is Google Clips, the tiny camera I’ve hooked onto this stocking. Google Clips captures short motion photos [or clips… get it?] without you having to, well, take the photo. It’s smart enough to sense motion, and it even gets smarter over time–the more you’re with someone [like your kids], the more Google Clips knows to capture photos of those people.

It’s a great way for mom to actually be in the photo, too. Without having to coerce an Instagram husband. 😉 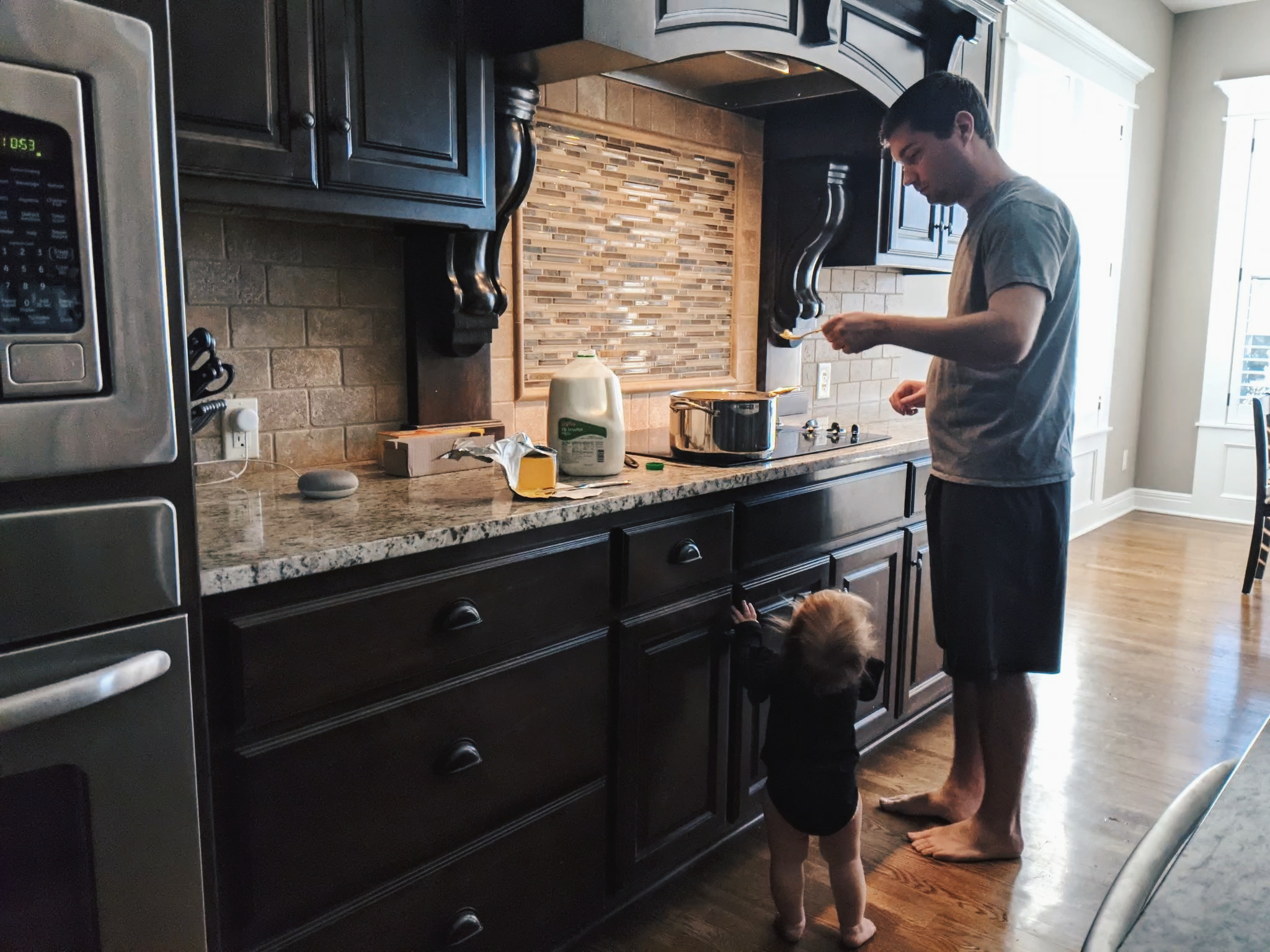 Speaking of husbands, I have to brag on mine. Let me start here: I haven’t been feeling myself lately. I’ve mentioned before how I suffered from depression and anxiety while practicing law, and I think it’s the kind of thing that never really leaves. It’s hard to explain unless you’ve been there, which, of course, I wouldn’t wish on anyone. A telltale sign of depression is not enjoying things that you normally enjoy, and that’s basically how I’m feeling going into this holiday season.

I’ve hosted Thanksgiving every year since we got married [way back in 2009], except last year because Blair was like 2 months old and life with a newborn is hard enough without hosting guests. So anyway, I normally enjoy all the prep and planning, but I totally wasn’t feeling it this year.

My rockstar husband stepped up to the plate and did a ton of this year’s cooking. He also helped me shop for everything at the grocery store. Here he is on Thanksgiving morning making some “husband brand mac and cheese.” We call it that as opposed to Wife Brand, which is… you guessed it, the blue box. Gourmet chef I am not.

Verizon also sent us the Google Home Mini to try out, which is sitting on our kitchen counter. We mostly use it for impromptu dance parties, but it can control everything from your TV to your lights. Since my husband and I both recently got Google Pixel 3 phones, it’s been fun playing with all the new Google tech. 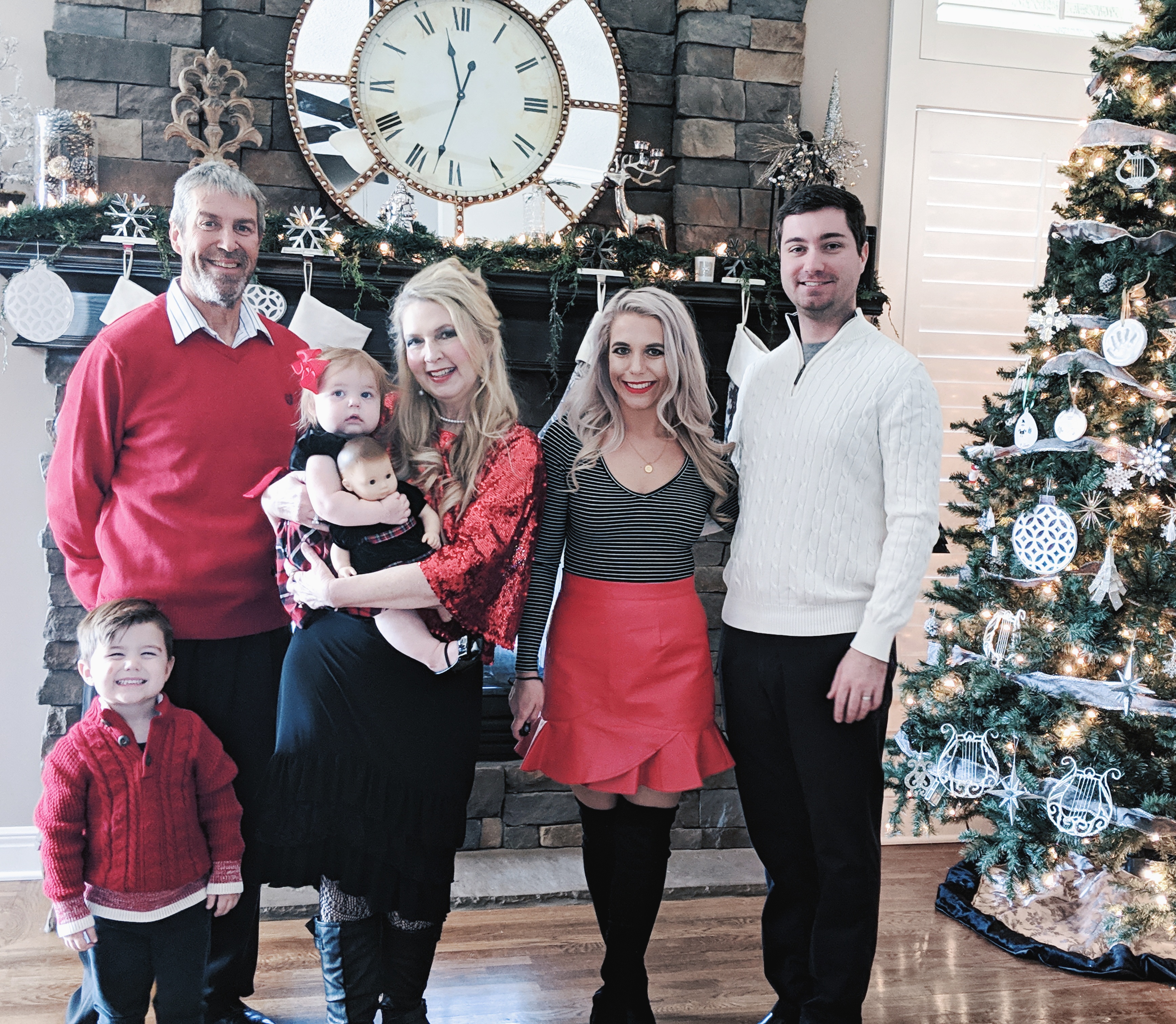 My parents came over for lunch, and the first thing we did was take a family photo. My mom has been wanting a family photo for a few years, but it’s hard to get little kids to cooperate. This year, I decided to get a tripod and Bluetooth remote for my phone and DIY at home. It’s not exactly professional, but I think it looks pretty good.

I just need to get better at hiding the remote.

Oh, and that’s Blair’s Bitty Baby in the photo. She takes that thing everywhere, so my mom even got Bitty a Christmas dress to match Blair’s. How sweet is that? 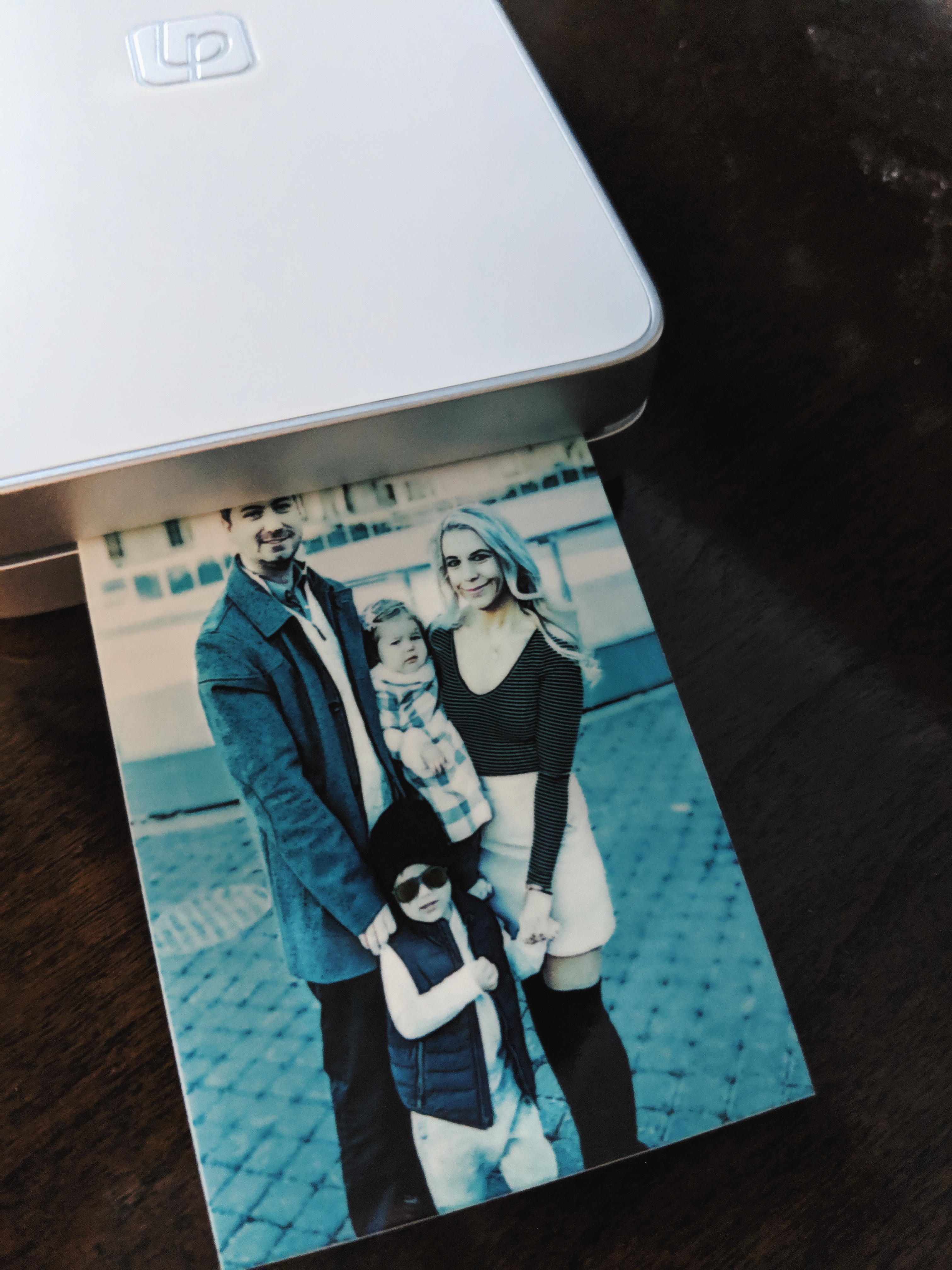 We also took photos with just the 4 of us a couple weeks ago, which are going out on our Christmas cards. When I opened up this little Lifeprint photo and video printer, the first thing I did was print a sample image of our holiday card photo. And yes, you read that right–it’s also a video printer.

Basically, the video functionality comes into play when you record a video within the Lifeprint app. When you print an image from that video, it will have a small watermark in the corner. If you scan that photo again with the app, the video will play! It’s a fun little idea, and Blair and I had a good time recording lots of little videos while the boys mowed the lawn in the afternoon. 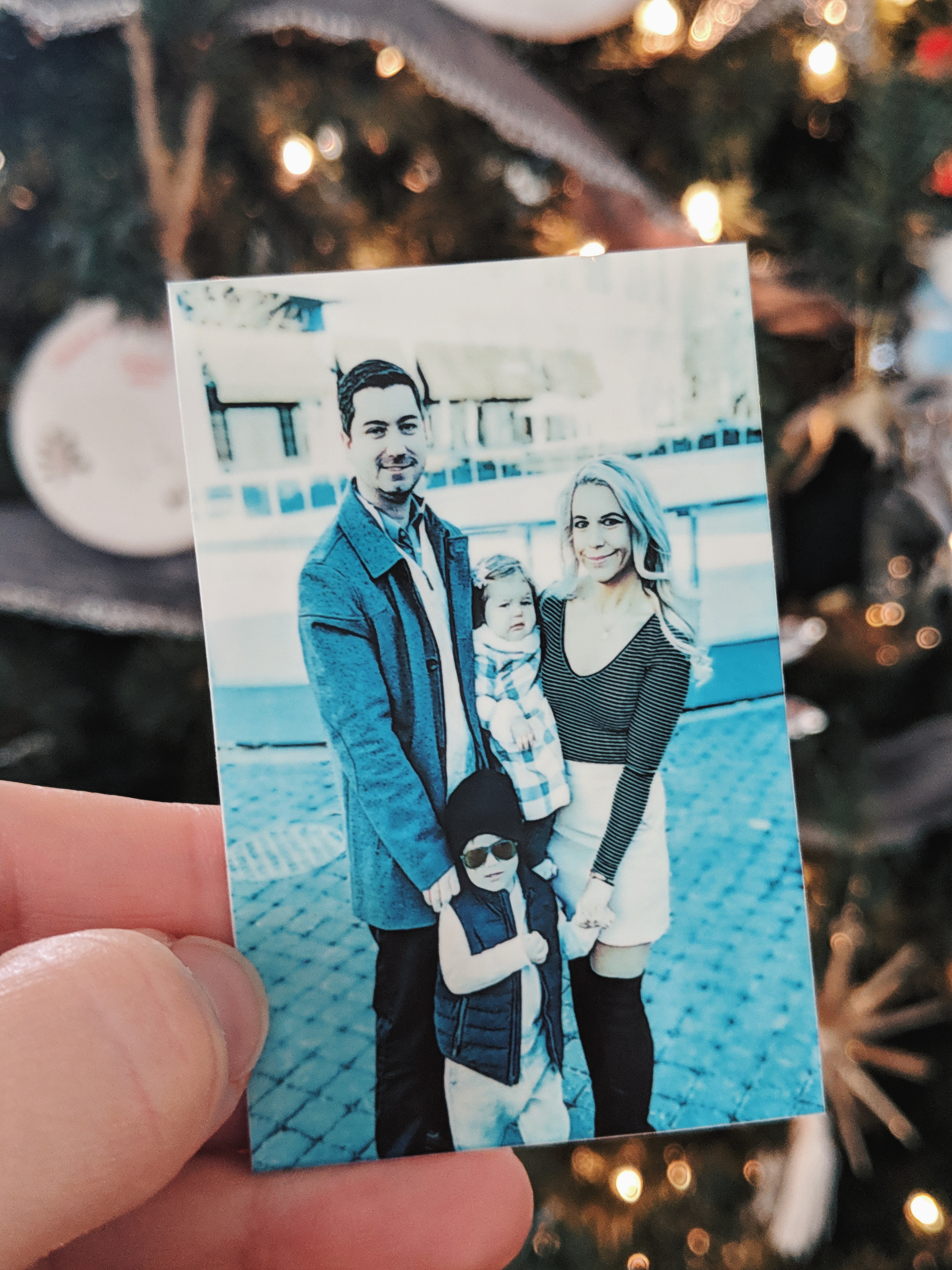 Since I pretty much never print photos, I love the small size and print-from-phone capability of the Lifeprint printer. I have all my photos on my phone, but sometimes it’s nice to actually touch one, you know? 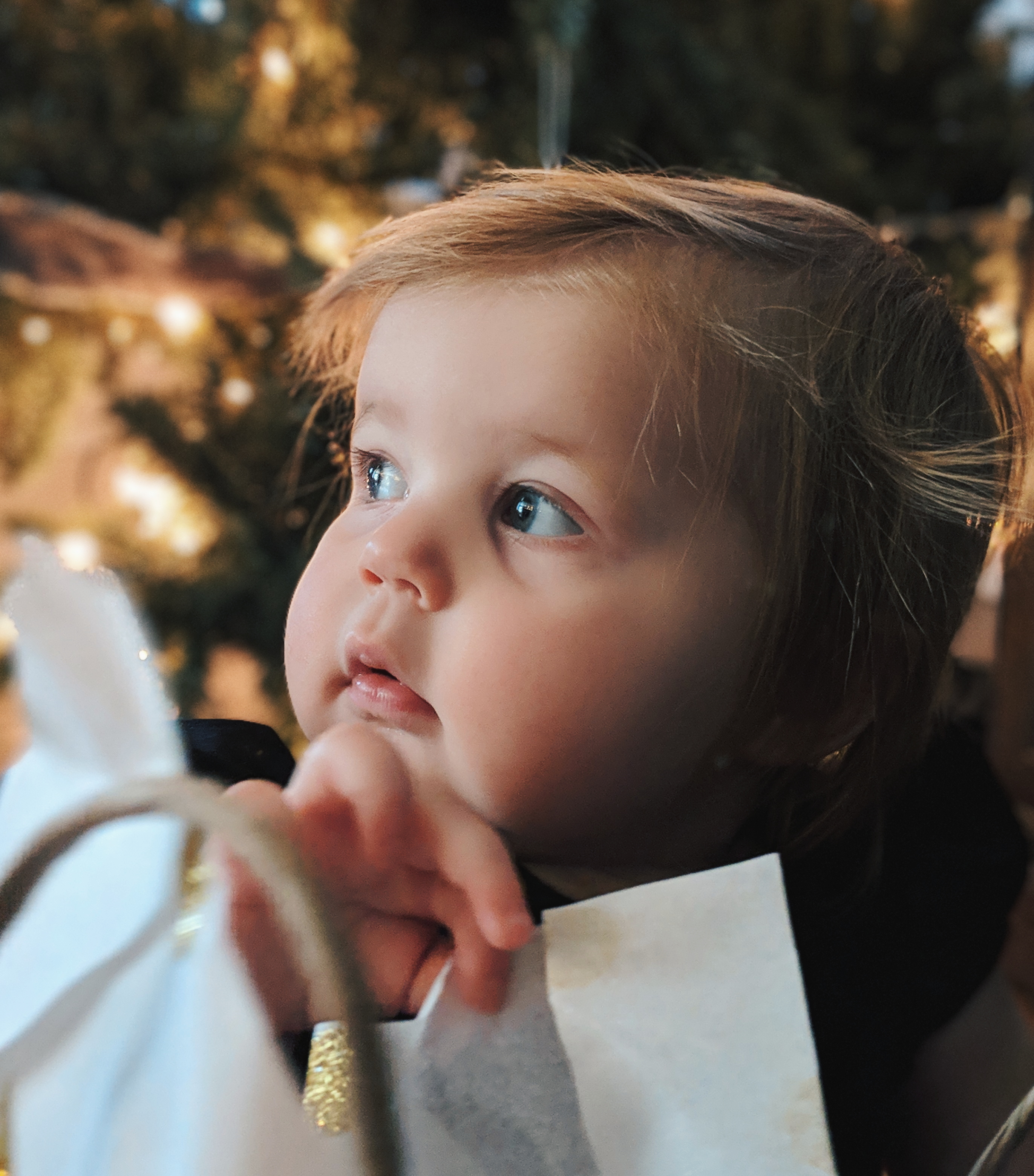 After the boys mowed, we had a little dance party and heated up some leftovers for dinner. The best part about Thanksgiving is the leftovers! And, as you can see, Blair is already looking forward to opening her Christmas gifts.

Make sure you check out the massive sales at Verizon this holiday season! Right now, our Google Pixel 3 phones are 50% off! I just switched over from an iPhone and I have to say, I really like it. The camera is what convinced me to switch–I tried out the Pixel 3 camera and the iPhone XS camera and, in my mind, there was no comparison. I honestly think the Pixel 3 frequently takes better photos than my actual DSLR camera. 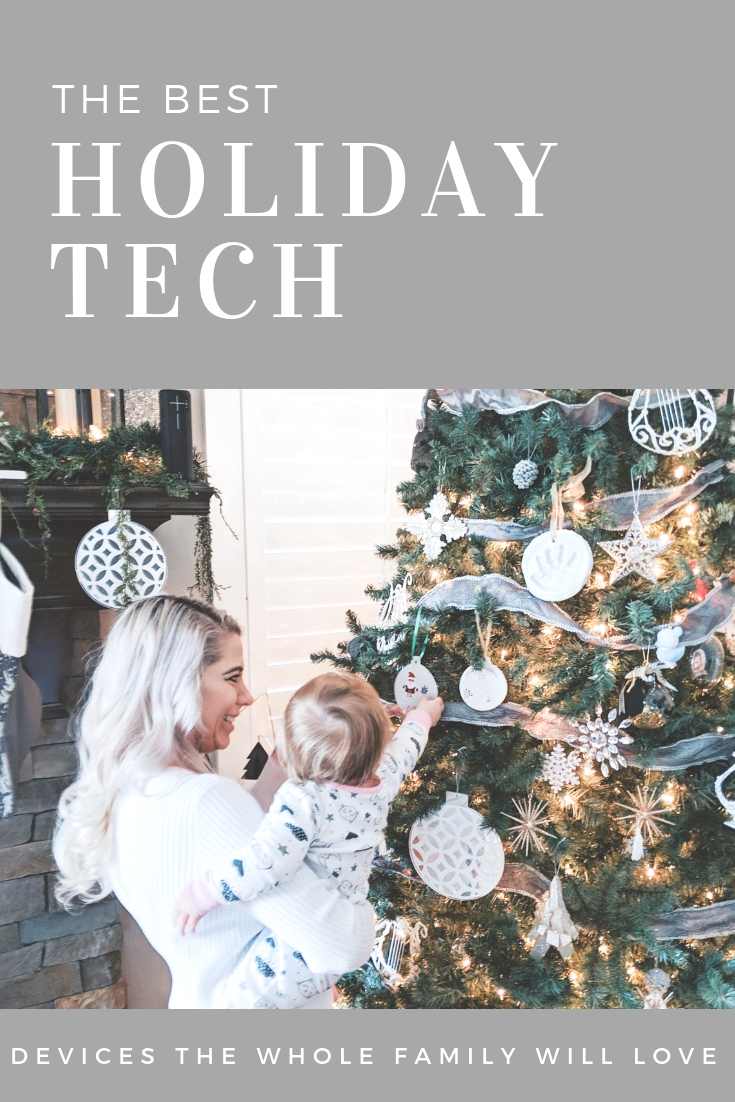 Pin the best holiday tech in this Thanksgiving as a Family of Four post for later! 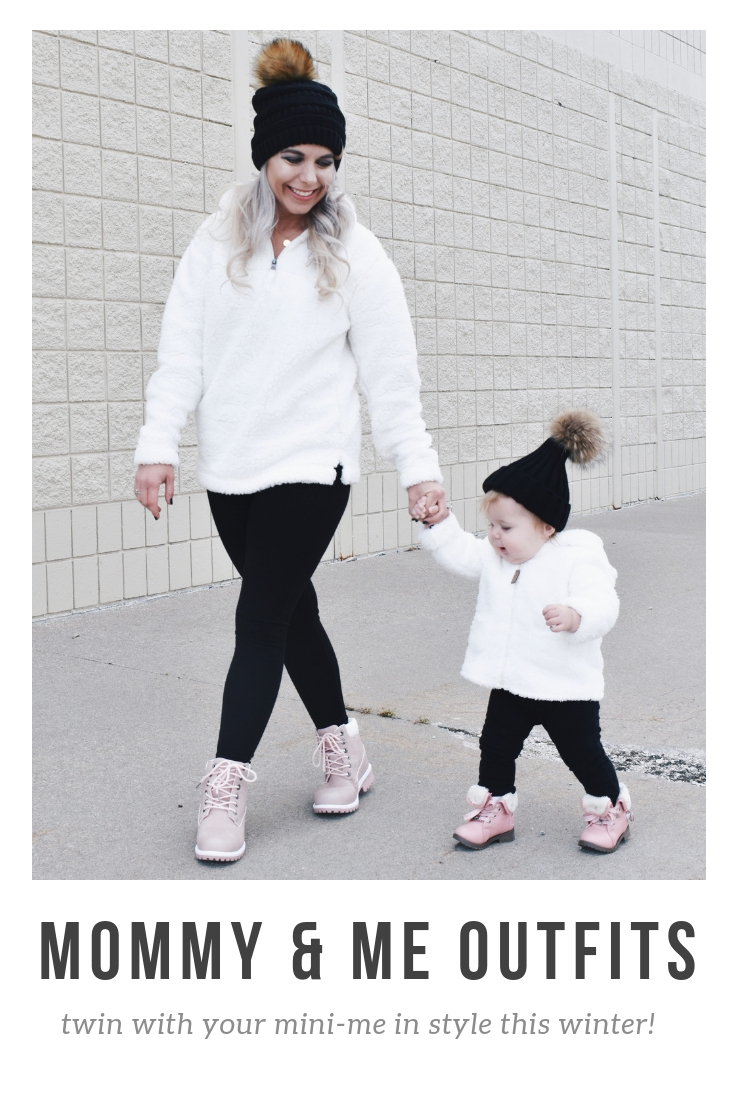 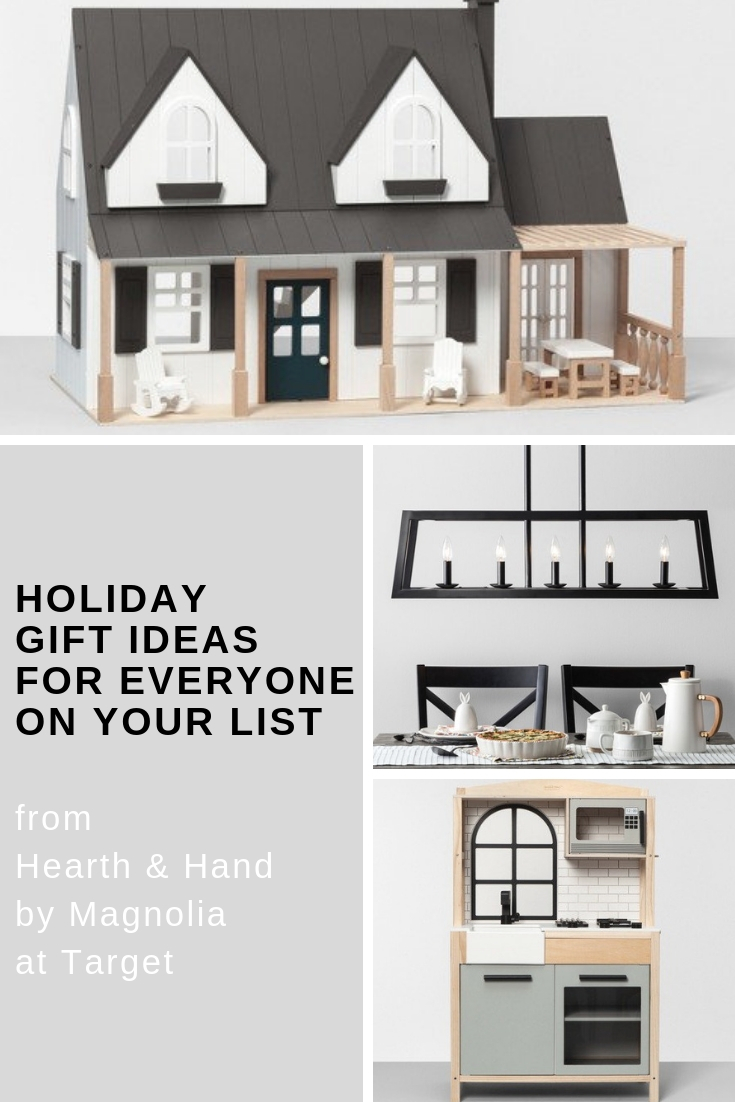 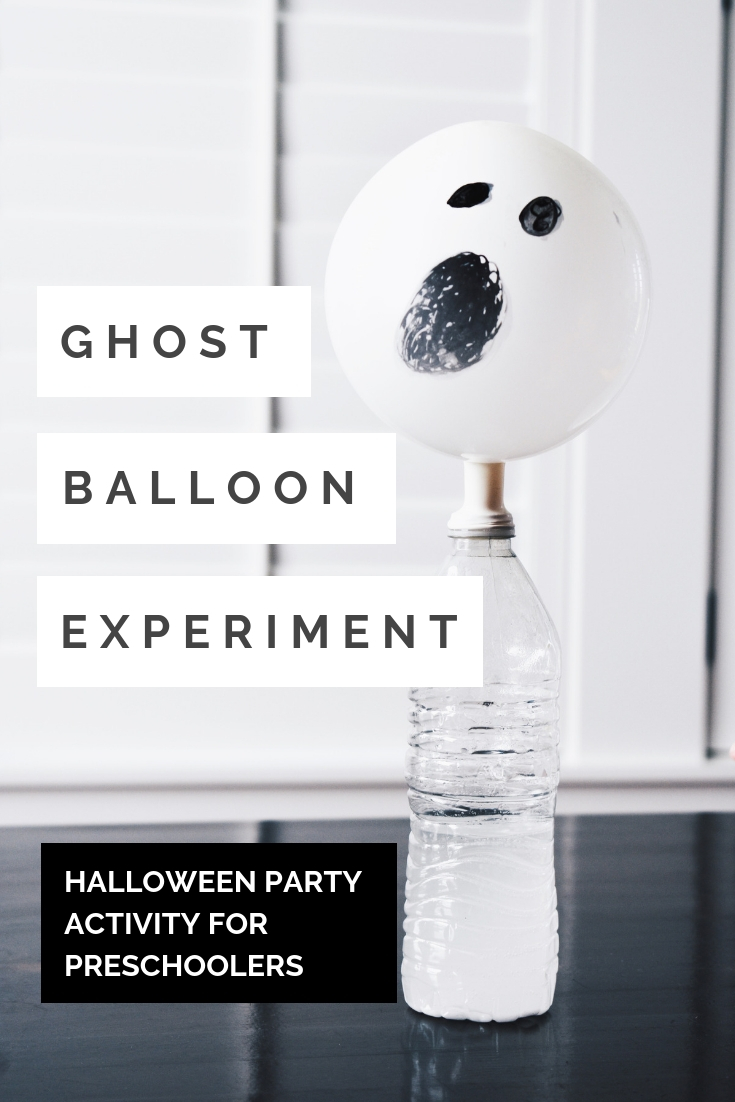 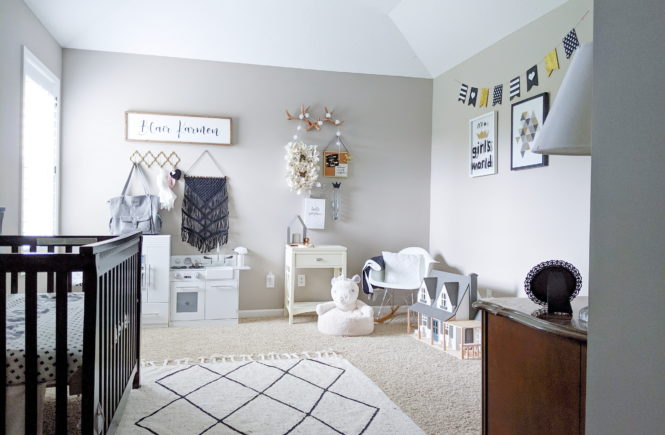 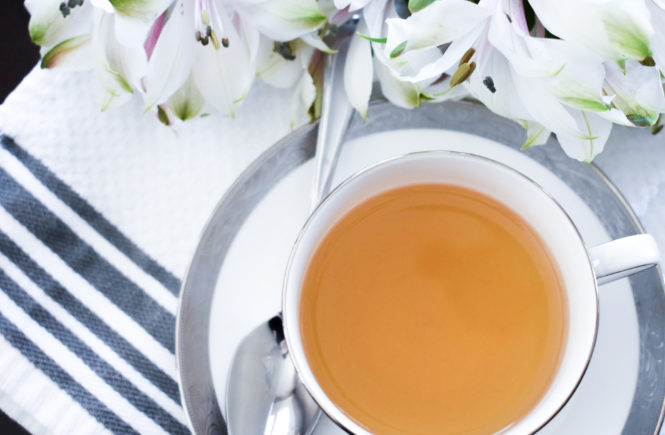 5 Ways for Busy Moms to Relax 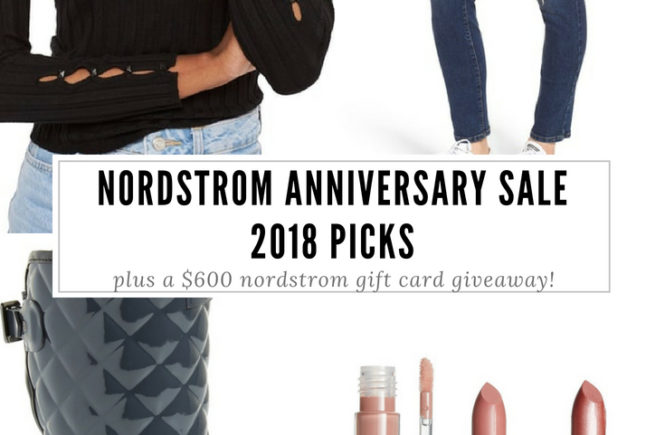 Cooking up some fun with these cuties! (ad) I alwa

Lots to be thankful for this year ❤️ P.S., mat

Yesterday was 90 degrees here in KC and I was remi

Today, my daughter sat with me while I was sworn i

Who else is cheering on #teamusa tonight? 🇺🇸

Summer afternoons 😴 Blair had dropped her nap a

Cinderella was my favorite princess when I was a k

Colton had his first basketball game today! He did

Blair had her first dance show of the year recentl

I’ve been drinking lots of hot beverages to keep

GO CHIEFS! ❤️💛❤️ Any other KC girls her

Decor is down but the kids are still in Christmas

Anyone else have the Christmas Sads this morning?